To explain blockchain technology using concepts that we’re all familiar with, it is best described as a data management system with a native currency. The fusion of data and money, if you will.

Considering the mainstream obsession with Bitcoin’s monetary aspect, the BSV Academy is dedicated to highlighting its data-related value propositions as well.

Nonetheless, the Bitcoin blockchain’s monetary features are not to be dismissed. Where the traditional financial sector and the Internet as we know it battle, Bitcoin soars.

(Note: download our ‘What is Blockchain?’ eBook if you’re confused about how Bitcoin and blockchain fit together)

What I’m referring to, of course, is the BSV blockchain’s ability to facilitate transactions worth a few cents for a nominal charge.

The potential of this capability within both the financial sector and the Internet is endless, never mind the data-based economy of the fourth and fifth industrial revolutions.

Though a lot of Bitcoin enthusiasts are examining applications of blockchain micropayments and nanopayments, these two concepts are often bunched together as if the latter is simply a smaller unit of the same principle.

Is it that simple, or are we missing the point?

To explore the two terms and the nuances in between, the BSV Academy teamed up with Steve Shadders, the author of the term ‘micro-services’.

The backstory of micropayments

The word micropayments has been around for a long time, and it generally describes payments that are below the threshold that would make sense in traditional financial services.

Think about the average credit card transaction that might cost 30 cents. If the product you wanted to sell cost a dollar, you'd be losing 30% of your revenue. If it cost below 30 cents, you'd be in the red. The fee defines when it stops making sense to accept payments.

With BSV, fees are around one hundredth of a cent at the moment with the potential to go significantly lower. With such low fees, payments of half a cent or even a tenth of a cent can make sense. Here we are talking about micropayments.

Micropayments sprout the need for nanopayments

Although nanopayments refer to payments much smaller even than micropayments, they are also born as a result of microtransactions. Let’s say you end up with 10 satoshis (a miniscule fragment of a US dollar) in change after making a microtransaction.

As you can see in the diagram below, your 10 Satoshis wouldn’t be enough to spend and pay the miner to accept the transaction. Your small change is what we call 'dust': it's such a small amount that you wouldn't be able to move it around, even as a microtransaction. 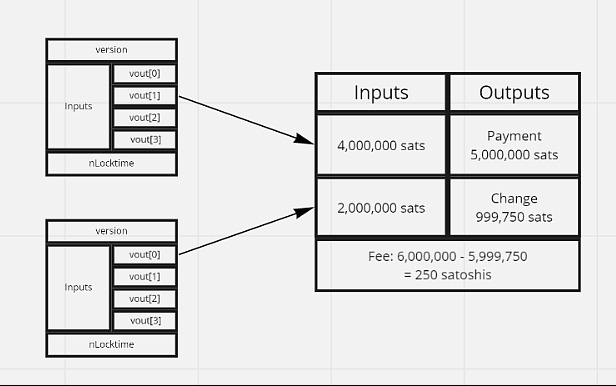 The way we get around this restriction in BSV, is through 'consolidation transactions'. These are a special class of transaction where you combine lots of these dust inputs and send them to a miner, who then compresses all the bits into a single output that's above the dust limit. Though the miner would be performing this service for free, they benefit by reducing the size of the datasets they have to maintain. So, instead of having to keep track of a hundred one penny coins, they simply log a single pound. 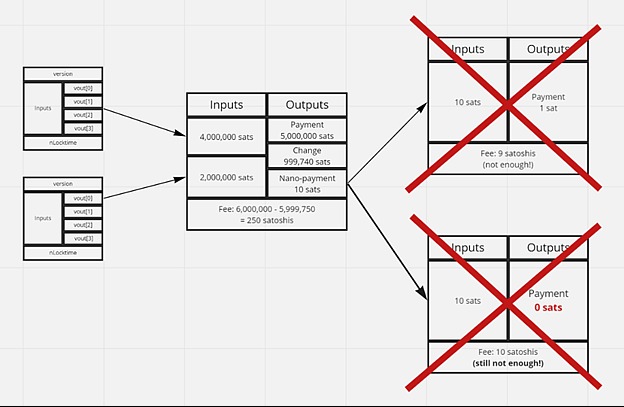 Turning ‘dust’ into a nano-service business

If dust particles can be consolidated into spendable amounts, providers can start offering services that cost a hundredth of a cent or even less on a cost-per-use basis. It might be a miner offering SPV proofs, fraud insurance or double-spend alerts.

Once the service provider has received enough dust, they would pool all of these nanopayments from different customers to consolidate it into a spendable volume of satoshis.

Imagine you had nine pennies in your wallet. With nine separate pennies, you wouldn’t be able to buy anything at the supermarket, or exchange it for a coin of a higher value at the bank. It’s essentially useless to you, or ‘dust’.

If you went next door to the game arcade (old school, I know), you might find a bubble gum machine that lets you insert five of your nine coins in the slot in exchange for a piece of gum. The owner of the machine will later exchange the pennies collected from you and many other bubble gum connoisseurs for a larger denomination at the bank. This is the equivalent to making a nanopayment for a nano-service.

At the end of the day, the owner of the vending machine would empty out all the pennies into a bucket, take it to the bank, and exchange it for a number of pound notes. This illustrates the mechanics of a consolidation transaction.

Develop your own micro- or nano-payments business or app

Feel inspired to design your own micro- or nano-payment business?

But it doesn’t have to be.

The BSV Academy offers a certified Introduction to Bitcoin development course that will help you gain the formative skills and grasp the crucial concepts needed to build applications with Bitcoin successfully.

As a bonus, we offer our introductory course free of charge! To register, simply click over here. 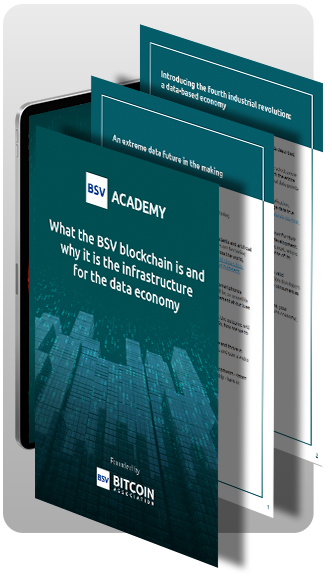