Are you a blockchain-curious software developer? Then our blog series on businesses building blockchain applications on BSV is for you! Whether you want to learn the Bitcoin scripting language or work on the front-end development of blockchain applications, these business case studies will give you an idea of where you could fit in.

In the first edition of this series, the Bitcoin SV Academy spoke with Elas Digital founder, Brendan Lee, Managing Director at Predict Ecology, Daniel Keane and Founder at WeatherSV and MetaStreme, Paul Chiari. Though they head up small teams, they all understand that the BSV blockchain’s potential for the Internet of Things (IoT) sector is tremendous, and it is only a matter of time before corporate giants catch on.

BSV Academy: Where is the Elas Digital team based?

Brendan Lee: We have our headquarters in Brisbane, but it's only myself and my assistant, Ethel Climent, working from the office. Everybody else is remote. Mo Jaber, who is the co-founder of the business, is based in Melbourne. Sam Almaliki, a business strategist and development expert, is also in Melbourne, and we just hired Brent Bevear in New South Wales.

The core development team who are building the software are all over the world. Darren Kellenscwhiler, or Deggen, as he's better known, has just relocated to the U.S. We've also got Freddie in Ireland and Craig in Scotland. We also recently added Tuitala in Tuvalu, who will initially be helping us on the TNDL (Tuvalu National Digital Ledger) project, and hopefully much more.

We're starting to gear up to expand more. We have a few projects in the works, and when they move forward we'll have to expand at a rapid pace.

When that time comes, we'd like to start building a team here in Australia, especially here in Brisbane. I love working in an office with people, but I haven't had that opportunity in a long time. Since last year I've had Ethel in the same room, and it's been wonderful having her to talk to, so I'm keen to establish a larger presence here.

BSV Academy: Do all your developers have to know blockchain or are some of them only doing front-end development?

Brendan Lee: Currently, all of our developers are drawn from the BSV blockchain ecosystem. At the same time, we recognise that there's a huge opportunity for us to bring people in from the cold - talented developers who don't necessarily have blockchain experience.

We spent a lot of time simplifying using the blockchain. So we should be able to bring people in and very quickly upskill them to use our tools and build within the Metanet without requiring a good grasp of Bitcoin script or any of the intricacies that we have had to grapple with. Now that we have the tools, the need for understanding the bare metal of Bitcoin kind of fades away.

In short, we're happy to reach out and find people entirely from outside of the blockchain sector.

BSV Academy: When you start expanding the team, what skills, specialities, certifications and experience will you be looking for?

Brendan Lee: That would depend on the projects we're working on at the time. Someone who understands the Metanet and knows how to build within it would go to the top of the pile. But those people are as rare as hen's teeth and are typically already doing their own thing.

Given the experience we've had when drawing from people who have prior blockchain experience, I would almost call that a disadvantage. People from the broader blockchain space think in a particular way about how things should work, and you have to beat it out of them. You have to train them to think differently about how blockchain works. I would be much more interested in somebody who understood how to scale a platform and didn't know anything about blockchain, because that’s something we can teach them.

I worked on developing the Bitcoin SV Academy’s courses myself, so I would probably use those as a starting point.

BSV Academy: When you start hiring, will you be advertising the positions, or should people be stalking you on LinkedIn and introducing themselves?

Brendan Lee: We will be advertising, but people are more than welcome to reach out. We have a list of people who have applied for positions in the past because we don't really know what skills we’ll need for the next project.

Right now, we have all the resources we need. It's when the next big project comes in - and we have about three or four of them lined up that could land in quick succession - that we're going to have to triple in size in a very short space of time.

I would love to hear from anybody who thinks this is a place they might like to work. Reach out. Please send me your resume. When we need to move, we will move very quickly.

BSV Academy: You’re an ecologist by training, but the Predict Ecology platform is built on blockchain. Do you have blockchain developers on your team?

Daniel Keane: I started my undergraduate university degree in computer science and physics, so blockchain doesn't scare me that much, particularly from the mathematical and coding side. But I do work quite closely with my collaborative partners, Paul Chiari (the founder of Weather SV and Metastreme) and my business partner, Dr Helen Mason. Beyond that, we employ a fellow ecologist with blockchain development skills.

BSV Academy: Do you need more blockchain developers in your business?

Daniel Keane: I'm certainly looking to employ developers in the future. At the moment, Predict Ecology is only a relatively small business, but as we get funding and scale, our need for blockchain development skills will grow.

BSV Academy: What skills are you looking for in a developer?

Daniel Keane: It’s crucial for blockchain developers to understand the nuances of a particular industry so they can create integrations that make sense in business and real-world scenarios. Knowledge of hard coding is not the only important skill set. It's about building mechanisms that are flexible and general enough to be able to record the sort of information that relates to our industry.

I prefer to teach a specialist general skills rather than teaching a generalist specialist skills. The ideal blockchain developer is rooted in a particular field to tether their blockchain learnings to an industrial application. I came out of university as an ecologist, to which I tethered all manner of skills; machine learning, botany, remote sensing, physics, geochemistry and a whole heap of other things. I could do this because I had an understanding or a grounding in a discipline. I'm excited to see which individuals end up retraining to become Bitcoin developers and their backgrounds.

I find that diversity indicates the value of an employee. If we are to realise Satoshi's vision of Bitcoin as a reimagining of, dare I say, Nikola Tesla's worldwide brain (supercomputer), we're going to need people from diverse cultural, social, and technical backgrounds as well as the entire range of theoretical and practical disciplines to bring value to the Bitcoin ecosystem - simply because they can see its application to former or current life experience.

BSV Academy: Who does the Bitcoin development for MetaStreme and WeatherSV?

Paul Chiari: I'm not much of a developer myself, although I can build out the conceptual side of things. I've got an outstanding young developer working with me to do the more technical Bitcoin development. We also have some general front-end development experience among the team. Right now, it's a part-time hobby, while our main business is in IT consulting. We're transitioning to a place of doing less business IT services so we can spend more time on blockchain projects.

BSV Academy: Do you foresee the need for more blockchain developers in your business?

Paul Chiari: I'd like to think so. At the same time, I'd rather be focussing on the application development level. We're essentially a team of hardware engineers, so once we've moved beyond the core blockchain development, the priority will shift to getting IoT networks and devices connecting to the BSV network through Metastreme.

We are using Node-RED and other open-source IoT software platforms to interface into the blockchain so that we can roll out IoT projects. It will allow people without blockchain development experience to build their own IoT projects. Within the next six to 12 months, we'll have frameworks in place that lets you create your own business utilising IoT and MetaStreme. All you need to do is build the  application itself or modify an existing application to interface with Metastreme.

BSV Academy: What skills and experience are you looking for in your developers?

Paul Chiari: We're interested in bringing business, industry, devices and databases onto the blockchain, so we need people working with IoT-based applications. IoT developers and IoT integration specialists are a good fit for our business - the people who are building actual applications around the data to get it utilised. We are already engaging with people working on these types of projects as there's a lot of synergy with our own work.

BSV blockchain applications in other industries

Make sure you subscribe and follow us on social media to get a deeper look at the different industries building business applications on BSV’s enterprise-scale blockchain and get an idea of where your skills could fit in.

Are you ready to look for a job in blockchain development? Head over to our job board to see what’s available. 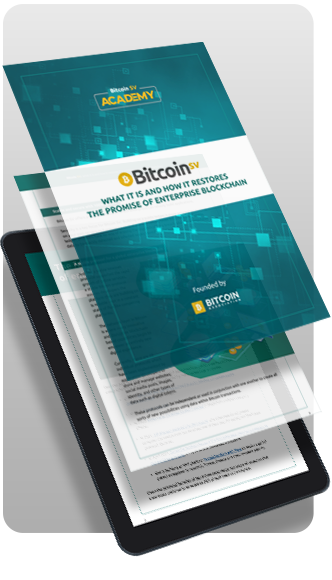