What sets BSV apart from other Bitcoin implementations and blockchains?

The BSV blockchain, like Bitcoin (BTC) and Bitcoin Cash (BCH) traces its origin back to the Bitcoin white paper. And yet, while BSV shares a foundational document with these other Bitcoin node implementations, its vision of Bitcoin and technical foundations set it apart.

When it comes to other private and public blockchain projects, the BSV blockchain's approach also stands out.

The majority of blockchains and Bitcoin node implementations zone in on particular use cases for a specific market.

IBM’s blockchain lets supply chain partners share trusted data while Salesforce blockchain is for creating networks of trust between CRM partners. Ripple aims to be a global payments network for financial institutions, while Bitcoin Cash prides itself in offering peer-to-peer payments between merchants and retail customers, as well as individuals. Bitcoin (BTC), on the other hand, has a strong emphasis on enabling the storage and transfer of economic value (high value transaction) without any need for an intermediary.

The vision that sets the BSV blockchain apart

When it comes to the BSV blockchain, its vision is to roll out the Bitcoin protocol and infrastructure in such a way that it can serve an unlimited number and variety of blockchain applications, globally.

BSV’s vision stems from its understanding of the Bitcoin protocol. While Bitcoin is undoubtedly a peer-to-peer cash system, it also has many aspects in common with data management systems.

By fusing the two - data and money - Bitcoin upgrades data management systems, financial systems and even Internet commerce for the fourth industrial revolution, the data-based economy.

The BSV blockchain and the data economy

In the new economy that is developing, data (specifically Internet of Things data) is becoming a strategic asset that can be sold and exchanged.

If we want to harness this smart future sustainably and profitably, we will need a data infrastructure and a protocol that can provide the required speed, security, scalability and sophistication.

The BSV blockchain can deliver on these requirements to become the foundational technology of the data-driven economy.

To learn more about how BSV helps you evolve your business applications for the data-based economy, download our eBook.

On the BSV Mainnet, transaction throughput of 3,987 transactions per second has been demonstrated over a sustained period (at height 656003) - and it keeps growing.

Security is another key focus area for the BSV blockchain. Building on a public ledger is more secure than running on your own servers as it removes a central point of failure. Given BSV’s immutable ledger, attackers have no way of erasing the logs indicating a breach, allowing manipulated data to be quickly detected and infected nodes identified and isolated.

Just like a stable Internet protocol supported the rapid growth of online services, a stable Bitcoin protocol gives developers assurance they are building on a platform that is reliable - not in a constant state of flux like many competing platforms.

BSV’s application layer is where many innovative and disruptive blockchain-based services begin to empower an entirely new digital experience.

Currently, there are 28 individual protocols which have been implemented by application developers to store websites, social media posts, images, identity and other types of data including tokens.

These protocols can be independent or used in conjunction with one another to create all sorts of new possibilities with data within a BSV transaction.

Because of BSV’s unbounded block cap size, it is the most cost-efficient network to transact on, allowing people to make small, casual transactions. Such micropayments enable ground-breaking applications in the corporate, scientific and public arenas.

The monetisation of the Internet through microtransactions

By fusing Bitcoin’s data capabilities with microtransactions, Bitcoin lets us attribute value to individual data points while offering us a channel through which we can trade that value. This ‘monetisation of the Internet’ creates a huge opportunity to improve existing ecommerce systems and invent entirely new online business models as well.

In a corporate or scientific scenario, the fusion of data and microtransactions makes way for huge improvements and innovation. Businesses can set the most complex criteria for collecting and trading data with their partners and clients, set permissions and automate the process via the blockchain.

Furthering research with the monetisation of data

In science, a medical research company could canvas for participants in a study. Individuals who choose to participate could submit their existing medical records to the blockchain under the condition that it can exclusively be accessed by that medical company. To incentivise mass participation, the company could offer remuneration of between a penny and a pound per data point. Whether a participant contributes a single record or a lifetime's worth, they are automatically paid upon submission.

Learn more about the BSV’s understanding of Bitcoin

Although Bitcoin has many aspects in common with other data management systems and blockchain protocols, it is its differences that translate into unique benefits, such as: 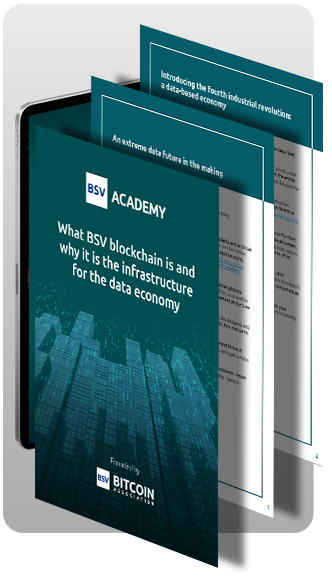